How to Implement Lean Manufacturing: Straighten and See (5S) – Part 2

Before moving on, I want to spend some time talking about how Straighten and See (and Sort and Shine, for that matter) adds value to the enterprise.  In other words, we need to talk about answers to the question:  Just what is Straighten and See for anyway?

I did some web searching for “purpose of 5S” and found several articles.  To their credit, none of them said, “It’s to keep the place clean and orderly.”  Tidiness and cleanliness are a happy by-product of 5S.  Beyond that, though, I found a variety of statements as to just what the purpose of 5S is, including things like “culture change” and “safety”. No argument there but most of the “purpose” statements I read can be achieved by other means as well.  Few of the statements really get at a purpose that 5S and pretty much only 5S serves.

Look at the picture here, especially the “before” picture. 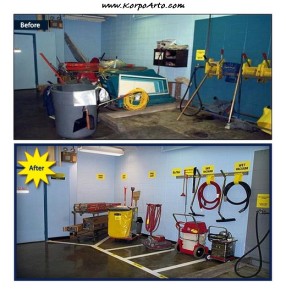 Is this “process” in control or not?  You might answer “no” and, yes, that’s a good answer but the truth is…we don’t know.  Maybe everything that needs to be there is there.  Maybe not.  Yes, even if everything is there we can organize it better so that it’s more easily retrieved. And that’s important.  But I’d contend that it’s even more important to be able to tell, at a glance, whether the “process” is in control or not.  In the “After” picture, we can tell that the “process” is “in control”.  Everything is there in the right amount.

Let’s look at another example. 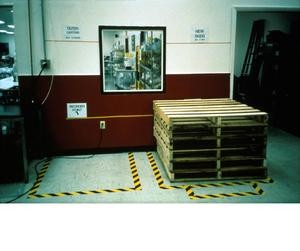 Take a look at this next picture and answer the same question: Is the “process” in control or not?  Well…yes and no, right?  We see some “in control” examples and some “not in control examples as well.  We see that pallets need to be ordered and that other pallets will need to be soon.  We also see that something might be missing…see
that small square in front of the pallets?  And we see a clear “out of control” situation with that electric cord lying right across the area where the pallets will need to go.  So, we don’t know anything about this area but because it’s received at least some 5S attention, we can say some pretty definite things about what’s going well and what isn’t.  (Gotta move that outlet, though, right?)

Let’s look at still another example.  This one effectively shows the impact of Straighten and See.  The picture to the left illustrates a condition in which it’s clearly not possible to tell whether the “process” is in control or not.  The picture to the right illustrates much better housekeeping, right?  The problem is…we still can’t really tell whether or not the process is in control, can we?

Are those pallets where they are supposed to be in the right amount?  Can’t tell, can we?  There’s a rack with boxes tucked in there…what’s in those boxes?  Again, can’t tell.  And that metal sheet off to the left?  What is it?  Is it where it’s supposed to be?  You got it…we can’t tell.  So, the place looks orderly and all that but it doesn’t meet our standards for 5S. 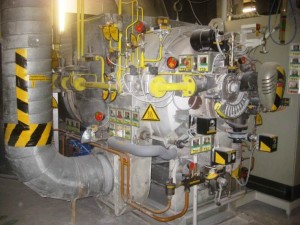 Here’s a different sort of example of Straighten and See.  Not much got straightened here but we can see the effects of a good Shine and the value of good visuals (See).  Yep, I know it’s a bit difficult to see the details in this small picture but you can see a variety of visuals all intended to make it safe and easy to operate this boiler (I think that’s what it is, anyway.)  Look closely and see if you can make out the visual applied to the gages..red area when the gage shows an out of spec condition, green area for an in spec condition.  Using these gages configured this way, anyone can stand ten feet away and tell whether the “process” is in control or not.

One last example, one of my favorites. Take a look at this final picture.  We don’t know anything about this 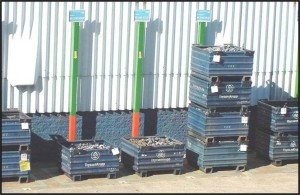 operation.  But, at a glance, we can tell a good deal about the process (at this point) and what its status is.  We have enough of whatever is in one of those gaylords and not enough of what’s in the other two.  It’s as good an illustration of the purpose of 5S as I’ve come across.

So, there you have it.  We could show lots more examples of what I’m getting at but I think you get the point by now.  5S is simply about tidiness and good housekeeping.  It’s not worth the trouble it takes to fully implement it if that’s all we’re going to get out of it.  The purpose of 5S is the ability to tell at a glance the status of our processes, to tell at a glance whether they are in control or not.  A secondary purpose is what I call “short cycle problem solving”.  Take a another look at that picture just above.  Do you see how “short cycle problem solving” works?  I can see at a glance that I need more of those two components.  I immediately take the necessary steps to obtain them.  Short cycle problem solving.