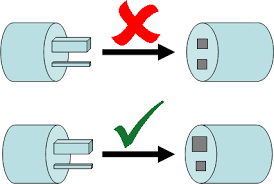 Another thing is that there’s error proofing and there’s error warning. And each requires it’s own explanation and set of examples.  An example of error proofing is that my car can’t be put into “D” unless I’m pressing on the brake.  Error warning is that “Service Engine” light that I’ve ignored for a couple of years now and the little bell that rings when I don’t fasten my seat belt (that one I don’t ignore).  All that is straightforward enough but…when does one employee error-proofing and when does one employ error-warning?

Finally, error proofing isn’t easy.  It often takes some fancy engineering or at least some know-how and a bit of time to design and install many error proofing mechanisms.  One can have a plant organizing it’s work place within an hour but error proofing takes planning, a bit of creativity, and probably a bit of finances to (That transmission-brake linkage in my car didn’t design itself, ya know.)

I read an article in my local paper today about a 94,000 gallon jet fuel spill recently committed by  the Navy.  It’s caused a lot of problems in the area including home evacuations, wild life kills, and worries among local residents about contaminated air and water.  It was, and remains, a big deal.

Here’s an excerpt from an article I found online about the spill:

While the official cause is still under investigation, initial indicators point to a mishap during a tank refueling that occurred on Wednesday, May 10. Officials say a fuel switch was in the wrong position, which caused fuel to flow into a small 2,000-gallon tank instead of into one of three larger 880,000-gallon tanks. Once the capacity of the smaller tank was reached, the fuel overflowed for several hours. The Navy is still investigating how the switch was in the incorrect position.

Now, preventing this wouldn’t have required sending everyone to a class on error proofing…nor would it have required hiring an “error proofing expert” to give advice.  All it requires is that someone insist that the process be mapped and that every possibility for error be brainstormed and resolved.  And then it requires that someone actually implement those error proofs, preventions, or warnings.  I’m guessing that anyone reading this could come up with a few possible preventions or warnings, even knowing as little as we do about the situation:

Error proofing, like most lean tools, is pretty straightforward.  You just gotta do it.