My friends over at Wire-Net, here in northeast Ohio, recently posted an interesting article (The Rubik’s Cube Correlation) on their blog.

According to the article,  there are 43 quintillion possible formations for a Rubik’s cube.  So, if someone were to start 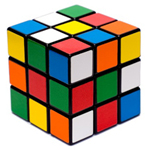 from scratch and try one formation per second, it could take…let’s see….10 million years or so if my math is right.  (Let’s say I’m off and it’s only a million years…that’s still a long time to figure out a toy puzzle, right?)  Here’s the thing…according to the article (and some others I found online just to verify), it’s possible to get the right formation in five moves, no matter what the starting formation.  And it’s not, “You can do this in five moves but you have to figure out what those moves are.”  It’s “There are five set moves, an algorithm of moves, in other words, that will provide the solution, no matter where you start. Here are the moves…”  In other words, no matter what you start with, someone can tell you the five moves to make and you’ll solve the puzzle.

I read the article and thought, “Lean manufacturing is like that.”

Lean Implementation as an Algorithm 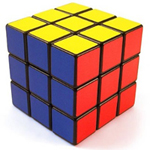 The idea is that, no matter whence a company starts, no matter how badly it’s “Rubik’s Cube” is disordered, there’s an algorithm, a set of prescribed moves that can get it in the right order.  No matter what you make or how badly organized your company is, 5S and Visual Factory will pay dividends.  No matter how FUBAR’d your processes are, mapping the current state, developing a desired state, then taking action to get you from here to there a step at a time…works.  No matter how ad hoc and idiosyncratic your approach to making stuff might be, documenting and reinforcing operator and leader standard work will improve…everything.  No matter how convoluted your shop floor scheduling and production is at present, a pull scheduling and production system will likely reduce that complexity and make everyone’s life simpler.  Lean concepts and tools are like those five Rubik’s Cube moves…they always work.

So, why isn’t every company trying out those five moves?  Instead, too many managers seem to be intent on working their way through each of the 43 trillion possible combinations to get it right.

I know of a company that agreed it needed a supermarket for a component of one of its products.  Not to over simplify it, but a supermarket can be as straightforward as painting a square on the floor where inventory will sit and developing a couple of easy procedures.  As in, “If this square is empty, make three pallets worth of the component and stack them up here.  If there are any pallets in the square, use them up.”  And that was pretty much all that was needed in this case.  Here’s the punchline:  two years later, there is still no supermarket in place.

Don’t get me wrong…culture change is always tough.  A client implemented a pull scheduling and production approach for a single component that involved organizing the WIP on racks and labeling them.  It took that client six months to get the approach working well.  But get it working well they did.   Even when you are given the right moves, they can be tough to make.  Even easy changes are difficult.

And, yes, I know that one needs to be careful in comparing an organizational change initiative to carrying out five moves needed to solve a toy puzzle.  The “moves” in the first case can be recommended by someone who’s solved the puzzle many times and they still need to be discussed within each new organization.

But it’s one thing to deliberate on how best to employ the needed “moves” in a particular organization and quite another to  continue on the “tried and true” path of trying another combination, then another, then another.  Sadly, too many manufacturing organizations are staying on that “tried and true” path, working their way through all 43 trillion possible combinations  in their search for the solution to the business puzzle.