In the last post, we recommended posting charts at each work station to gather information about production and performance that would be used to identify and solve problems.  Remember, the purpose of these charts isn’t simply to gather data that will be used later by your resident black belt (though it certainly could be).  The purpose is to identify and address problems in real time, in other words, lean problem solving.  So we’re interested in gathering as little information as possible in as “user-friendly” a way as we can and still get good problem solving accomplished.

We provided an example of a chart that has worked well for us in the past. 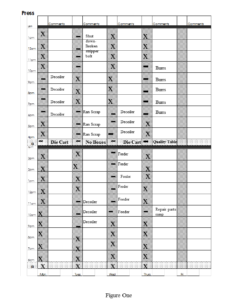 , we’re going to look at an imaginary example of a chart that’s been filled out by a stamping press operator and discuss how to interpret the information on it.  To review, the operator has put an “X” on the chart after an hour during which he or she makes rate.  The operator puts a “-“ (a minus sign) on the chart when he or she doesn’t make rate or is shut down altogether because of problems.  In these cases, the operator also makes a note of the issue related to the lost production.  In our imaginary case, the press is running two ten-hour shifts a day, four days a week.  Now let’s take a closer look at the chart.

Monday day shift goes well; the string of “X’s” indicates the operator made rate throughout the shift.

Monday second shift doesn’t go as well.  In fact, we see that the rest of the week is pretty rough.  We do see, though, that the operators have done a pretty good job filling out the chart and that’s a big help.  Because they’ve done a good job recording performance and production information, we can tell a lot about what’s going on here just by looking at the chart.

We also see that there are some equipment problems that need to be addressed; decoiler and feeder problems were responsible for 13 hours of under-rate production.

Most importantly, we see that supervisors and operators are not attacking problems quickly enough.  Notice the long stretches of under-rate production.  There are few good reasons why problems should hurt production for three, four, five hours and more at a time.  This is a signal that supervisors aren’t checking the charts often enough.  It’s also a signal that operators have gotten complacent about production issues.

This shop needs to get its supervisors and operators to address problems more quickly.  Supervisors must check the charts regularly and respond to problems as soon as they arise.  Operators must be involved in letting supervisors know as soon as a problem hurts production.  Maintenance and tool repair also need to be involved in checking the charts and assisting in the identification and resolution of problems.

In addition to checking the charts frequently, make certain that your supervisors are talking with the operators about what they see on the charts.  What’s going wrong with that decoiler?  Why isn’t the feeder working well?  What kind of scrap is being made?  What’s causing the burrs?  What has the operator already tried?  There is a myriad of possible root causes for any of these issues, from training to equipment to material tooling.  There isn’t enough room on the chart to put everything related to a problem, nor should there be.  Again, the purpose of the chart is to signal, at a glance, whether performance at the press is good or not.  Further conversation and analysis is needed to determine root causes and possible solutions.  The advantage provided by the charts lies in the fact that the conversations can take place as soon as the problem occurs rather than when it’s too late to keep it from ruining the schedule for the entire week.

Production managers and supervisors should meet at the beginning of each shift to review the performance of their last shift and go over any problems that have arisen on the previous shift.  In addition, they should meet regularly with maintenance and tool repair supervisors to review the charts to highlight recurring problems and develop solutions together!

These meetings aren’t a time for pointing fingers and placing blame.  The problems won’t go away because you think you have identified who is responsible for them.  They only go away when you’ve developed a culture of rapid problem identification and resolution.